It was windy and the sun shone directly to a heap of stones somewhere in the vast prairie of Inner Mongolia. Keystone Academy student Wendy Wu had just completed two clockwise laps around the three-tiered stack called ovoo or áobÄo. Only one more to go and she’d be able to say her wishes as part of finishing the ritual.

In ancient Mongolia, áobÄo (æå) originally functioned as guideposts. But centuries of folk history have transformed these signs into altars where locals offer sacrifices to the deities of heaven and earth. The colorful flags that adorn them act as a receptacle of good desires from the locals who believe that the wind blowing through the shrine will spread their wishes around the world.

“That belief makes me feel that the ritual of walking around it is directly connected to the soul. And that is why I felt pretty moved when I learned the story—that the Mongolians purely believe and respect their hearts and souls. They also don’t spoil themselves because they know that the áobÄo will carry their wishes around,” Wendy explained.

Wendy and her Grade 11 peers immersed themselves in the customs and environment of Inner Mongolia during their Experiential Learning Program (ELP) trip there in September 2019. The ELP is part of Keystone Academy’s academic framework of experiential learning, or “learning by doing.” Earlier in the same month, children from younger grade levels also ventured outside of the classroom, from the beach of Beidahe to the mountain paths of Zhangjiakou.

“Experiential learning is getting students out into the real world and actually letting them see what goes on outside and see how people live so that they can experience it themselves,” Grade 11 leader Rachel Hopkins explained. 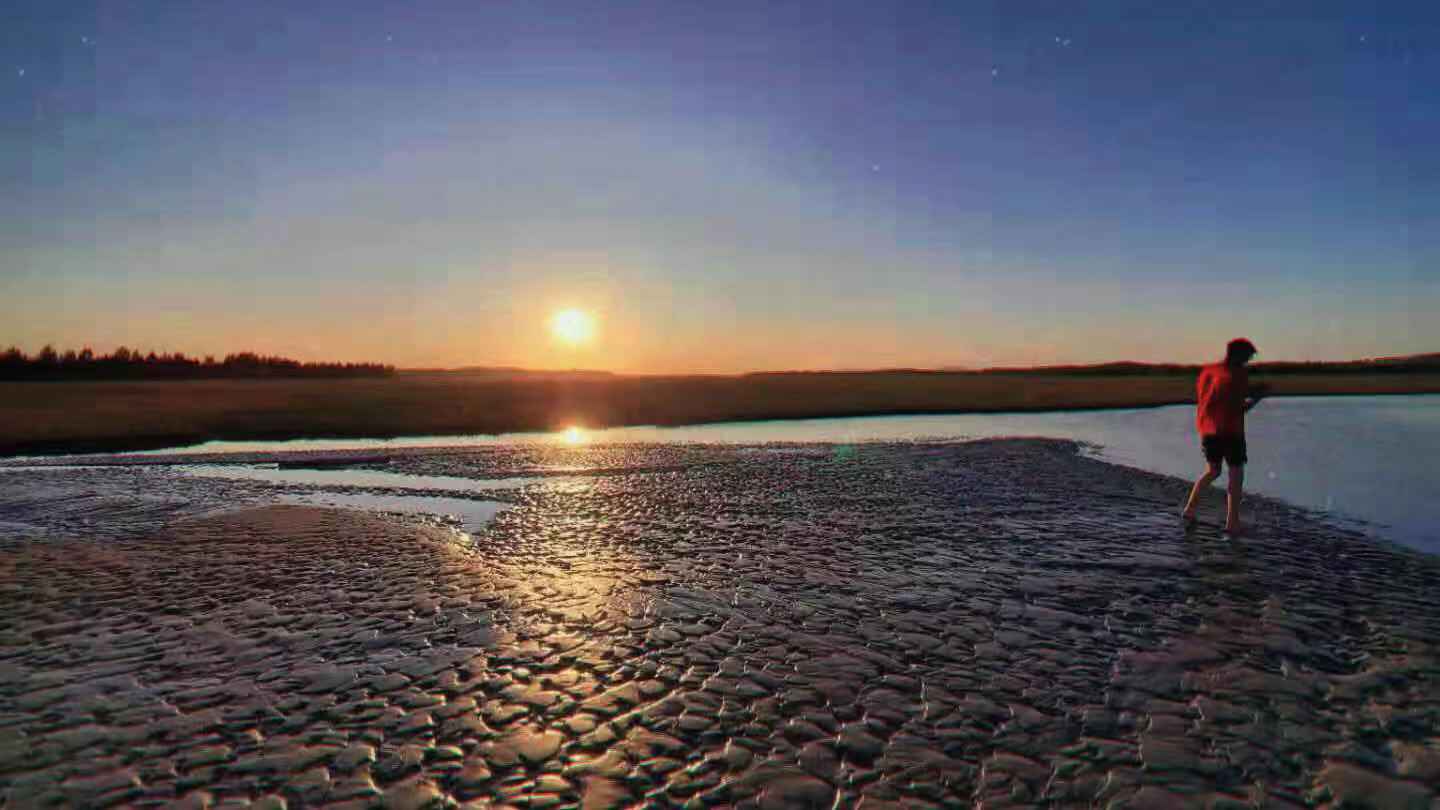 A Keystone student sketches her observation of Mongolian flora

During this five-day Inner Mongolia ELP, students explored the deserts and grasslands of the region. At a stop in the Yulong Desert, for example, they observed the terrain and created sketches based on its vegetation (pictured above). Over the Dalai Lake Geopark Area, the itinerary was physically demanding for the Keystone travelers but allowed them to reconnect with nature.

“We climbed a mountain where there’s a plateau at the top,” said Harry Zhou about an extinct volcano called the Anvil Mountain. “It’s quite difficult to climb and it’s chilly up there. But when you look around, you’ll find out that you’re so small in front of such a big space. We can even see the tracks of the ancient Great Wall. It’s quite moving because you can see how our ancestors had actually conquered this place and built the wall.”

“A Small Grain of Intrigue”

One of the pressing environmental concerns in northwestern China is desertification, a result of complex factors including climate change and human activities such as road construction and overcultivation[i]. Desertification makes the land unsuitable for agriculture, depletes groundwater sources, and provokes natural disasters such as sandstorms that blast eastward toward Beijing during spring.

Inner Mongolia is at the forefront of the battle against desertification because of its immediate effects on the regional ecosystems and economy. Locals and volunteers across China have planted crops in desert lands, and efforts like these have resulted in a partial “reverse” of desertification, at least according to a 2016 survey by the Inner Mongolian regional government. In that report, however, authorities cautioned that “the tendency of ecological degrading has yet to be ‘basically contained.’”

“Some of the students looked at the grasslands and observed rightly how quickly can something turn into sand or dust and how vulnerable China is,” said Andrew Scott, Keystone Humanities and TOK (Theory of Knowledge) teacher. “I was struck by the maturity of the kids and their analytical skills.”

Over half of Inner Mongolia’s land area is a desert

The students also interacted with locals to understand how they adapt to their environment despite the tide of globalization. In one activity, the eleventh graders set up traditional yurts, but for many reasons beyond an overnight camping experience. Brian Guo was impressed that Inner Mongolians still preserve the way of living in portable yurts despite the harsh weather conditions every day. Wendy Wu likened the personality of the locals she met to “the grassland that is always open to any form of challenges.” Shirley Zhao, on the other hand, noticed that some young locals are leaving these humble abodes on enormous grasslands for bigger cities to find opportunities.

Those observations by students reinforce the learning they receive in the classroom. Keystone Business Management teacher Jorge Durango said the Inner Mongolia ELP is like putting “a small grain of intrigue” to the students, which furthers their inquiry skills.

“We’ve previously discussed in our class the economic part of the trip and how Inner Mongolians survive and remain sustainable. Here they saw the new ways of enterprises and how, at one point, locals were nomads or sedentary people. Now, these people need to get these new companies up and learn the ways of obtaining what they need to survive.”

While deserts encroach the lands of Inner Mongolia, urbanization threatens its cultural heritage. According to the Unrepresented Nations & Peoples Organization (UNPO), only one out of five people in the Inner Mongolia Autonomous Region’s 20 million residents are ethnic Mongolian, and it is linked to internal migration and government actions to modernize the region. A local museologist said in an article that traditions such as the áobÄo ritual and the “manly” Inner Mongolian arts of bökh or wrestling, archery, and horse racing that were part of daily life are now “preserved mainly for tourists.”

But for students, traveling to a place to experience its culture, even for a short time, can give them a “window of understanding,” according to Marissa Kennedy, a program coordinator at The Hutong, which organized Keystone’s Inner Mongolia ELP.

“So many of the students talk about how their lives are different or the same with the people they have interacted with. But students are able to experience something that gives them more empathy and compassion for people who are not like them,” Kennedy said.

The Keystone student visitors are hopeful that Inner Mongolian cultural heritage can still be protected.

“In globalization, there are different cultures who are finding and building common grounds between each other,” Harry said. “But in that process, we will be more united as ‘globalized’ citizens of the world. But certainly, there are parts of us that shouldn’t be lost. We should preserve, understand, and know who we are, where we come from, and a particular part of the culture that builds us.”

“The resources that a student has access to are indeed very limited,” Brian said. “But in an information era, we certainly have the power to acquire and deliver messages. Culture in Inner Mongolia is fading as well, as anywhere in the country, except big cities such as Beijing where there is just so much attention going on. We roamed in a region for five days and learned something. Now we share that learning as knowledge itself is power.”

Seeing the Positives in Life

While students were exploring the culture and environment of Inner Mongolia, their teachers observed their behavior especially during situations involving problem solving and teamwork. Andrew was struck by how students expressed their perspectives and accepted the interpretations of each other. Rachel loved it when she and her students formed bonds and laughed together for five days, especially when teachers and students played against each other during a bökh match.

Students played against each other in a Mongolian wrestling match

“We discovered a different side to our teachers during that wrestling match. We actually had this urge to defeat the teacher who wrestled with one classmate,” Harry said, adding that he believes it will help them communicate better with the teachers, thus forming a good relationship in the classroom.

“When we left and we all walked out all the kids were like, ‘What were you doing?’” Rachel said, laughing at remembering how her co-teachers tried to tackle Andrew. “I think it's good for them to see their teachers outside of a different context—that they can also have fun. There's no way to get any of those experiences like you would outside of a classroom.”

Jorge said the experience would enable students to see the richness and diversity beyond Beijing. Rachel would like them to see the positives in life, such as the achievement of hiking a mountain on a windy day and apply that can-do mentality into school life.

The áobÄo ritual was one of the last activities that the Keystone students did before heading back to Beijing. While other students were offering sacrifices, Wendy completed her third and final lap around the altar with “small wishes” such as getting admitted into her dream university and achieving her target score on the SAT. After the ritual, she made a realization of why this waning tradition means a lot for Inner Mongolians.

“Walking around it three times certainly wasn’t enough, but in the process, I was able to establish a moment, perhaps really short, when I full-heartedly questioned myself what I really wanted and what kind of yearning I wanted to pass around the world. It is tough to pull yourself out of that atmosphere when you put yourself into the case of a wish-maker and an involver—it’s pretty impressive and magical!”